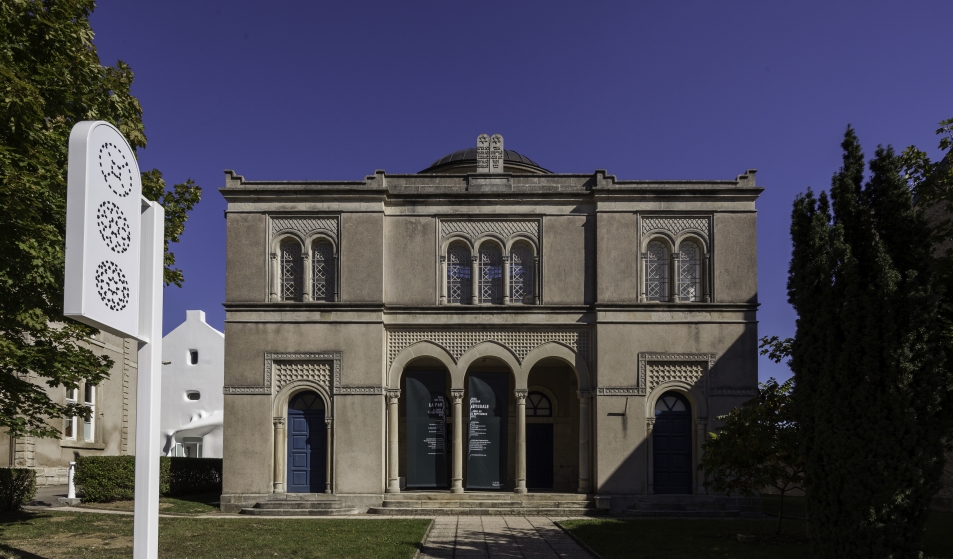 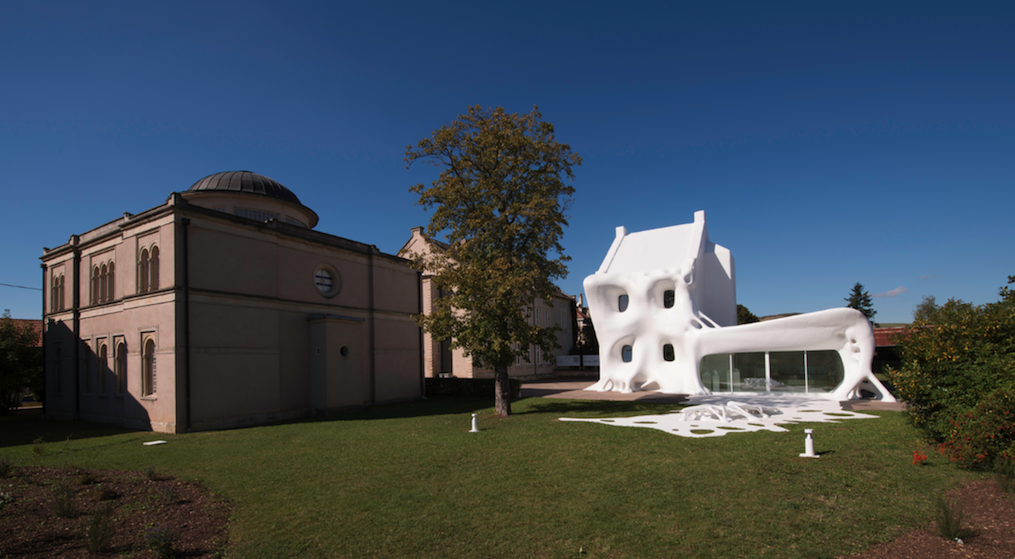 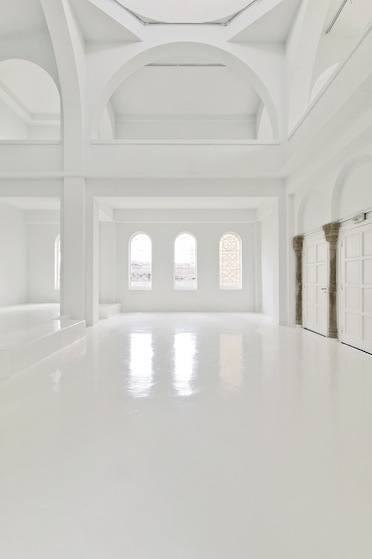 Inner view of the synagogue. 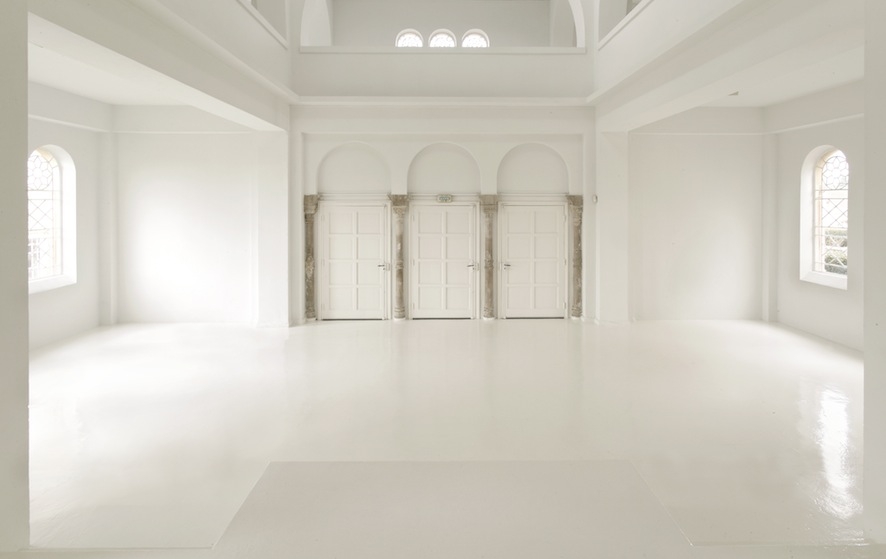 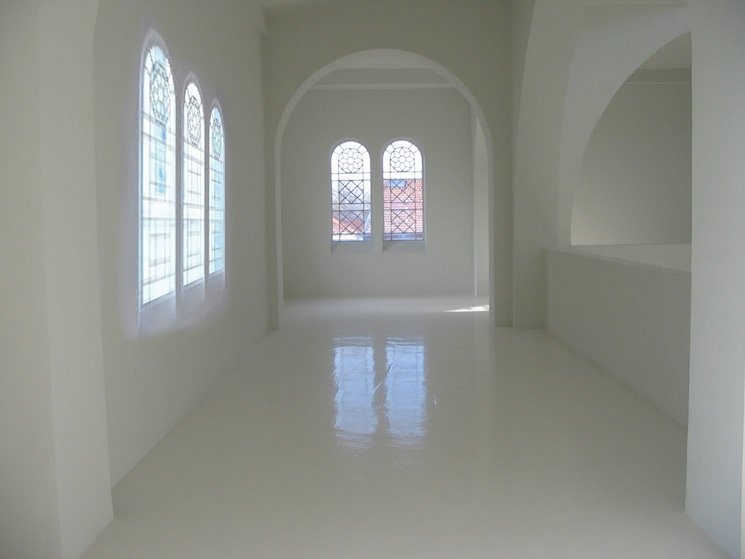 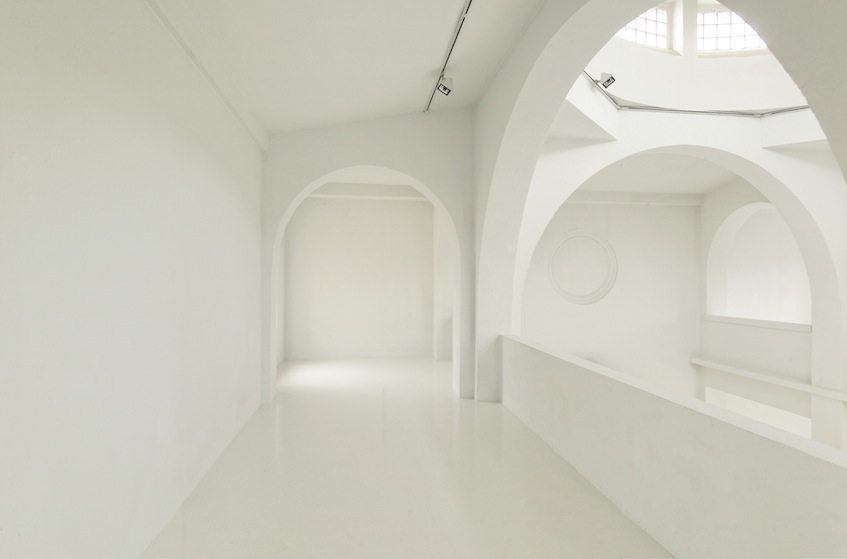 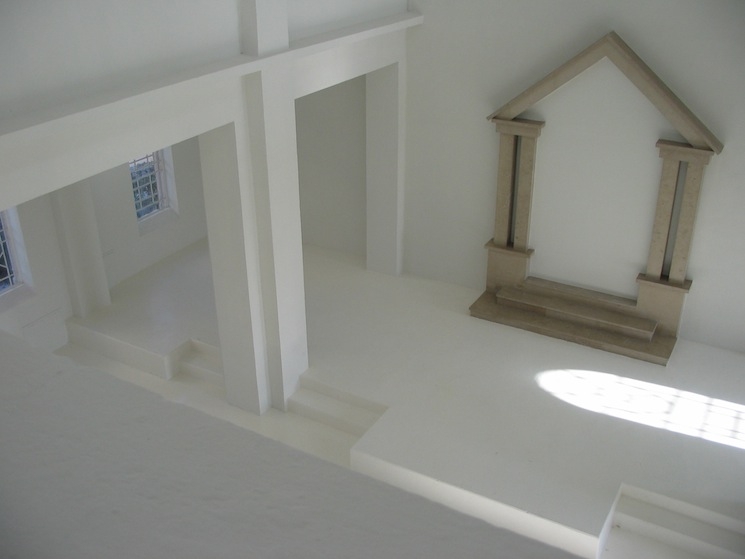 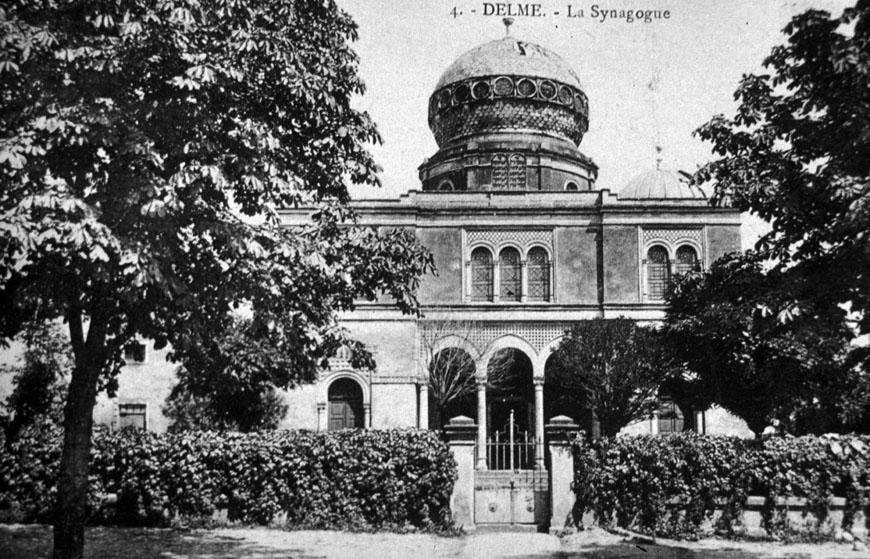 View of the former synagogue, built in the XIXth century.

BRIEF HISTORY OF THE SYNAGOGUE

The CAC - la synagogue de Delme is located in an old, oriental-style synagogue built in the late 19th century. Inaugurated in 1881, its design was modelled after Berlin’s New Synagogue, the architect taking his inspiration from this building, which had been inaugurated only a few years earlier. You find the same type of dome, the same entrance with arches, the geometric patterns…

During the Second World War, the synagogue was partly destroyed by the German army. The outer walls survived and the interior was reconstructed after the war according to the strictest guidelines. Due to a lack of resources, the original dome was replaced by a smaller one. The Delme synagogue held its final service in 1978, and permanently closed to worship in 1981 due to having too few followers. The war and the rural exodus had a detrimental effect on the religious life of the premises.

In 1992, the town of Delme signed a ninety-nine-year lease with the Moselle Israelite Consistory, which retains ownership of the property. As part of a proactive educational and cultural policy, the municipal team, on the advice of the Lorraine Regional Department of Cultural Affairs (DRAC), decided to dedicate this work of architecture to a new purpose, turning the synagogue into an exhibition space whose program would be implemented by an association.

Since 2019, the CAC - la synagogue de Delme obtained the label « Contemporary art center of national interest » by the french Ministry of Culture.

BETWEEN HERITAGE AND CREATION

It would be difficult not to mention these few historical milestones when introducing the Synagogue de Delme, an unusual art centre where history, heritage and contemporary art live side-by-side. Far from placing these elements back-to-back, the aim has been to create a dialogue between them. Through this contemporary art project, a whole chapter of memory is resisting oblivion and indifference, and a history continues.

Whether they do it with reserve or mischief, whether they lay firm hold upon the nature of the premises or its formal aspects (its symmetry, its play of circles and squares, its distinctive light, its acoustics that cause sounds to endlessly swirl…), the artists and the public cannot disregard the environment. This is what makes exhibiting in the synagogue so fascinating, and most of the time allows us to offer exhibitions that have been designed especially for this space. Far from the white-cube neutrality so characteristic of contemporary museums and galleries, the Synagogue de Delme is an extraordinary showcase that each artist can appropriate in a unique way.

But the list is long, and rich in projects that have breathed life into the place and allowed visitors to discover artists from around the world. Over the past twenty years, the CAC - la synagogue de Delme has shown the work of nearly 150 artists through 60 exhibitions (43 solo and 17 group). It has recently opened itself to outside perspectives by inviting curators (artists, independent curators or directors of partner institutions) who are involved in programming for the duration of one exhibition. The art centre has also organised activities outside the synagogue, including exhibitions, workshops and performances.

As part of its production, research and prospecting mission, the Synagogue de Delme invites both internationally acclaimed artists and young newcomers, sometimes offering them their first solo exhibition in an institution, thereby supporting emerging art.

In addition to the three or four temporary exhibitions organised each year in Delme, since 2002 the CAC - la synagogue de Delme has been coordinating an artist residency program at Lorraine Regional Natural Park in the village of Lindre-Basse. Every year, three artists come for three months each, to either conduct research or produce a specific project.

The art centre’s mission to support art creation and distribution includes a publication mission. The Synagogue de Delme co-publishes artist books, multiple originals and monographs linked to the exhibitions as a means of giving extra exposure to the work on site.

VISTOR MEDIATION AT THE HEART OF THE PROJECT

Finally, we should mention the Synagogue de Delme’s rural location in the heart of the Lorraine in eastern France, in a town with a population of 1000, thirty minutes from the urban centres of Metz and Nancy. This territorial characteristic leads us to turn our attention with all the more precision and commitment to questions of visitor mediation, awareness and support. All of the activities organised by the visitor service (guided tours, artistic practice workshops, introductions to art and philosophy, artist meetings…) are organised in close connection with the CAC - la synagogue de Delme’s exhibitions, constituting a natural extension. Every visitor, every group can benefit from a tailor-made visit and special guidance.

The 2012 public commission is the culmination of all the efforts of the Ministry of Culture and Communication – DRAC Lorraine, local authorities, as well as art centre staff past and present, to show contemporary art, to develop critical thinking, to break the barriers between fields of knowledge, to offer keys to understanding without imposing a one-way reading, and above all, to enter into dialogue with everyone without exception.